The curtains closed on our production of The Mikado a month ago, and since then things have been much quieter at HRG&SP. This post-show lull—too early to rehearse the next show, too late enjoy the fruits of the last—is precious to us in a number of ways. As well as allowing our sleeping patterns to return to a relatively respectable pattern and providing a much needed respite to catch up on neglected school work, this period of calm gives us time to take stock and reflect on The Mikado.

There are a number of crucial people who made The Mikado possible, most obvious among which is the marvelously talented cast. Yum-Yum (Isabella Kopits ’20) and Nanki-Poo (Ben Grimm ’18) were the very paragon of innocent love, whose soaring arias and overly earnest expressions of affection moved some to tears and many more to laughter. The unlikely and at times outrageous romance between Katisha (Zachary Mallory, Boston Conservatory ’16) and Ko-Ko (Aaron Slipper ’18) brought Gilbert’s libretto to sparkling life. Mallory’s creative vision as director brought out the very best in each actor, and teased out every possibility for nuance, passion, and humor.

Of course, no Gilbert and Sullivan operetta would be possible without an orchestra to bring Sullivan’s enchanting music to life. Music Director Sydney Mukassa ’18 and Orchestra Manager (and erstwhile second trombone) Jared Perlo ’19 performed their delicate task with seemingly effortless ease. The orchestra sounded particularly fine, even when called on to interact with actors and their on-stage shenanigans.

And then, there was the glittering set designed by Elizabeth Pattyn (Massachusetts College of Art and Design ’17) and built under the supervision of Technical Director Sabrina Yates ’19. The standard for HRG&SP’s sets has always been high, but it is safe to say that the exquisite detail seen in The Mikado is almost unparalleled. Everything from the painstakingly hand-painted checkerboard floor to the custom made beer bottle labels was the product of hundreds of hours of work.

But more than anything else, we owe a debt of gratitude to you. Though we look back fondly on the show’s cast, staff and orchestra, fonder still are our memories of our ever supportive audience; after all, we put on these shows to share the joy of Gilbert and Sullivan with fans both old and new. It is your laughter, your tears and your applause that inspire us to do what we do.

This semester has been a particularly challenging one for HRG&SP. We have attempted to grapple with The Mikado’s complex history and relation to race, and we thank you for being so kind and considerate in your feedback. It was instructive and enlightening to read the comments many audience members left on the note cards, and to talk to audience members and patrons at receptions. The Mikado is many things to many people, and we are better off for having you join us in discussion. 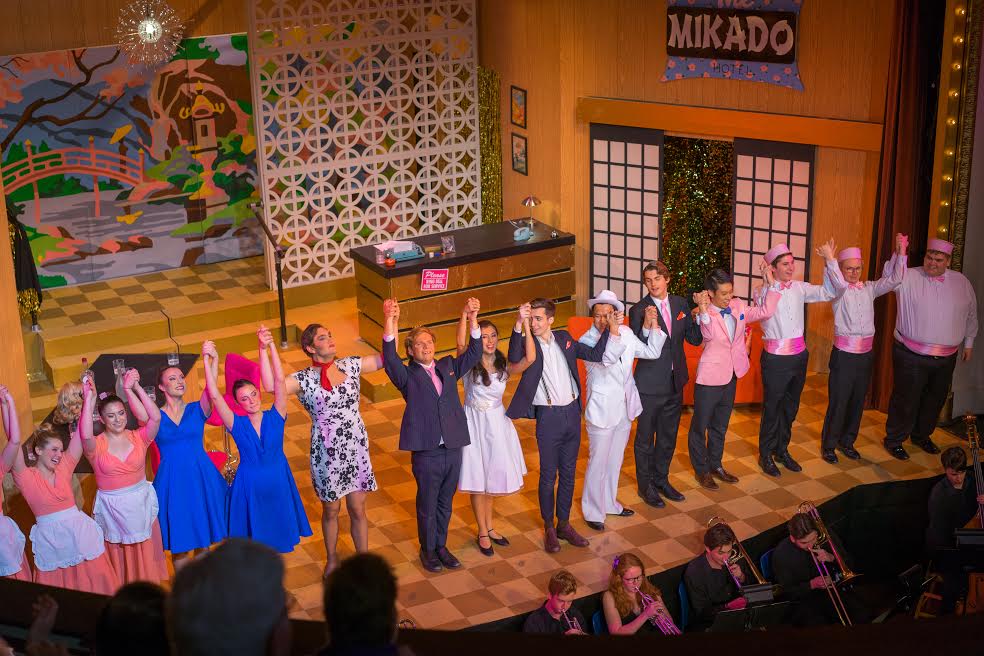 Finally, while it is only right that we look back on The Mikado “with joyous shout and ringing cheer,” the future is equally bright. Next semester we will be returning to the prototypical Gilbert and Sullivan operetta, the first to use the character tropes and musical elements that became the staple of later G&S shows. Join us again in spring as we take on The Sorcerer.

View all posts by Trevor Mullin